How to Invest in Coreum (CORE) – What is the Coreum Airdrop? (Updated) 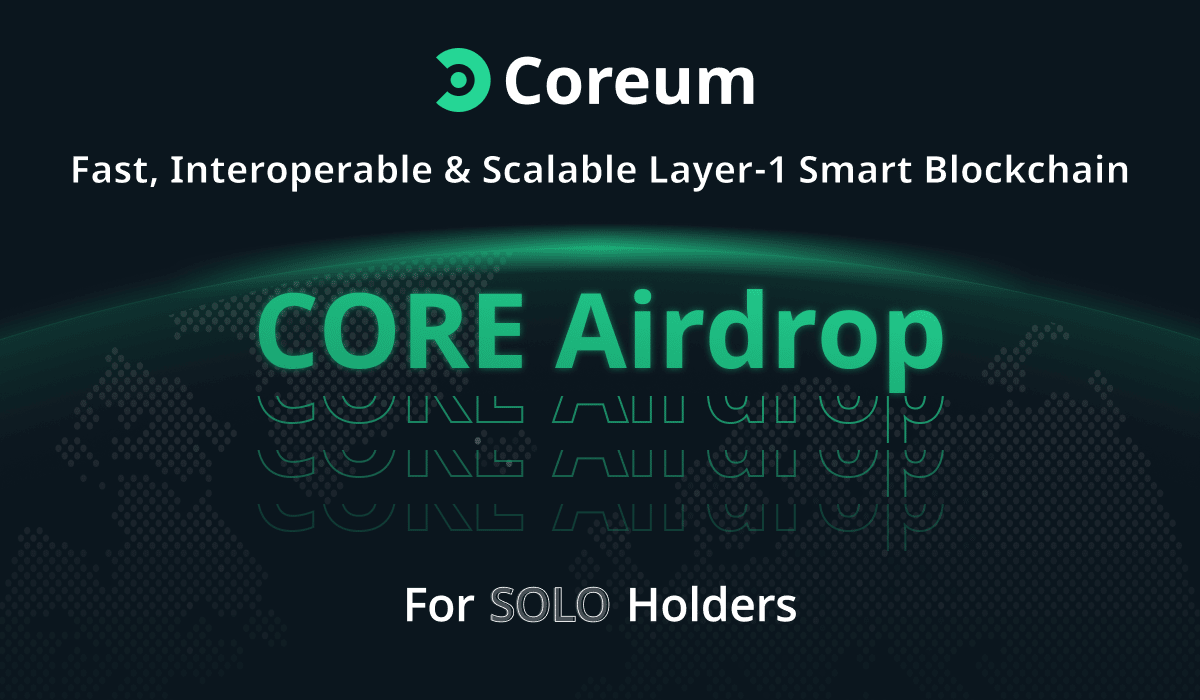 What exactly is Coreum? It’s a layer-1 blockchain with great security protocols and smart contracts – allowing dApps to be built. The aim of Coreum is to be a jack-of-all-trades blockchain, enabling smart contracts, cross-border payments, interoperability, and much more.

If you want to invest in Coreum, then you have likely been keeping up to date with Sologenic on Twitter. If so, then the chances are you would’ve seen their announcement regarding Coreum. Despite being beneficial for the project overall, many investors took it as a sign that SOLO was moving over to AVAX and leaving the XRPL and the XRP community behind. However, this has been confirmed to be false by the creators of Sologenic. Due to the combination of this FUD and the post snapshot sell-off, the price of SOLO plummeted by over 50% causing further fear, uncertainty, and doubt across the market. This can even be seen in the price of XRP;

How can I Take Part in the Coreum Airdrop?

As the previous SOLO airdrop caused some confusion in regards to AD ratios, it seems fitting we get that out of the way first. 100 Million tokens have been allocated for SOLO holders during the Coreum airdrop. This means that if there is a total of 10 million SOLO in eligible wallets, each address will receive 10 tokens. These tokens will be distributed monthly throughout 2022 to prevent the mass dumping of tokens onto the market. This also seems to be a measure to prevent as many people dumping their SOLO post snapshot/airdrop. Additionally, a further 30% of the CORE supply has been allocated to holders of the token, again, incentivising investors to hold for longer periods.

If you’re wondering what you’ll need to do in order to claim these free Coreum tokens, then we’ve got you covered! This time around there is no need to fill out any forms or set a trustline, as long as you already have the SOLO gateway trustline set then you’re good to go! You’ll be automatically included in the Coreum airdrop. However, if you didn’t take part in the SOLO airdrop or simply removed your trustline following the snapshot then it’s a little more involved. You’ll need to add the Sologenic trustline once more and purchase some SOLO. That’s it! The Coreum snapshot will be taking place at some point in the runup to new years eve (31st Dec 2021).

Sologenic (SOLO) is the token of the Sologenic DEX (decentralised exchange). It has a magnitude of uses in relation to reducing fees and streamlining transactions on the DEX. However, the majority of its popularity in recent times can be attributed to the SOLO airdrop, one of the largest airdrops in XRP history. Now that the SOLO airdrop is over and the price has decreased, it could be an excellent time to invest in SOLO prior to the new $CORE airdrop taking place at some point in the next few days (snapshot taken at a random time). So, without further ado, it’s time for us to delve deeper into the world of Sologenic.

Despite planning a move to a prosperity blockchain called Coreum in the near future, Sologenic was created on the XRPL (XRP Ledger). This means that SOLO can benefit from cheap and efficient transactions (around 4 seconds and a fraction of a cent). When we take a look at tokens on the DEX, the massive amount of XRP pairs reminds us that this project was, indeed, designed to benefit the XRP community.

How to Invest in Coreum – Step by Step Guide

Unfortunately, there is little documentation on the web regarding setting up this airdrop. This is likely due to a mixture of many content creators taking time off during the holidays, the animosity towards Coreum, and the fact that the XRPL is still fairly new to many.

As we mentioned, if you already have the SOLO trustline set, then you can skip this step. But if not, simply go to this link and follow the instructions. If you’re using XUMM then setting a trustline only takes a second.

As the Coreum airdrop is only initially available to SOLO holders, you’ll need to purchase some. This can be done from the Sologenic DEX. The current price of 1 SOLO is 1.42 XRP so 100 SOLO would set you back 142 XRP ($130).

That’s all there is to it! Easy right? Now all you’ve got to do is put your legs up and wait for the snapshot to take place (31st Dec latest). The Coreum should be distributed at some point in January, then every month afterward for both CORE & SOLO holders.

Get my Exclusive Weekly Crypto Roundup

When is the Coreum snapshot?

The snapshot is taking place at a random time between the 24th & 31st of Dec.

Is the Coreum Airdrop Safe?

As long as you take the proper precautions there’s nothing to worry about. We always remember storing large balances on a hardware wallet.

Jay is a cryptocurrency expert based in the UK. He's invested in a wide range of projects, ranging from small-cap tokens to large-cap tokens like BTC and ETH. Outside of cryptocurrency he has an unyielding interest in everything related to the stock market. Currently, Jay has been focusing on the macroscale and institutional adoption.

How to Buy Bancor – Buying Bancor for Beginners 2022

2 thoughts on “How to Invest in Coreum (CORE) – What is the Coreum Airdrop? (Updated)”

How to Buy Bancor – Buying Bancor for Beginners 2022